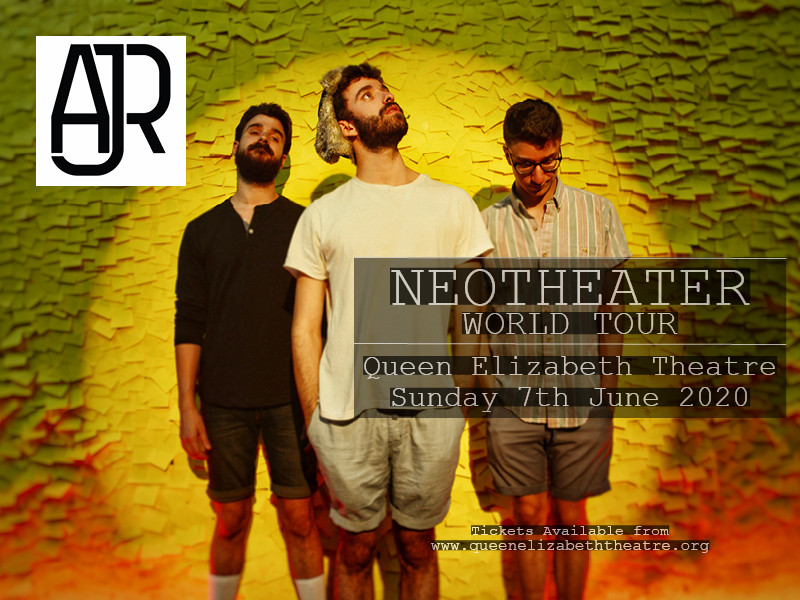 AJR are the multi-instrumentalist brothers Adam with vocals, bass guitar, programming, samples and percussion, Jack with lead vocals, guitar, melodica, ukulele, drums, percussion, keyboards, synthesizers, samples, programming and trumpet, and Ryan Met with vocals, programming, keyboards, ukulele and trumpet, hailing from the living room of their Chelsea apartment in Manhattan, New York. They play a combination of electro-accoustic combining elements of pop, doo-wop, electronic, and dubstep. Their most successful songs are "I'm Ready", "Weak", "100 Bad Days" and "Burn the House Down". In 2019, their third album Neotheater debuted at number 1 on Billboard's Top Alternative Albums, number 1 on Billboard's Top Rock Albums, number 8 on the Billboard 200, and hit number 1 on the Top Rock Albums chart! The band’s musical influences include Frankie Valli, The Beach Boys and Kanye West Much of the group’s close dynamic and musical chemistry comes from the fact that the brothers share the same influences. In addition to drawing inspiration from artists of the 1960s, including Frankie Valli, The Beach Boys, and Simon & Garfunkel, the brothers say that they are also influenced by modern hip hop and the sounds of Kanye West and Kendrick Lamar.” The brothers serve as ambassadors for the It’s On Us campaign to fight sexual assault on campus The Met brothers have been vocal about their support for the campaign, which was first launched by President Obama and Vice President Biden in 2014 to end sexual assault on college campuses and in January and released the song “It’s On Us” for the campaign.