EVENT CANCELLED. Due to the COVID-19 pandemic, this event has been cancelled. Please contact your ticket vendor for a full refund.

Comedian and late-night talk-show host Bill Maher comes to Queen Elizabeth Theatre on Saturday 16th May 2020 for a night of strong opinions and even stronger jokes, as he takes on politics, current affairs and more with his razor-sharp wit! Maher is never one to mince his words and his hot takes on life, the universe and everything will have you rolling in the aisles! Someone get the ointment – there's gonna be some third-degree burns! 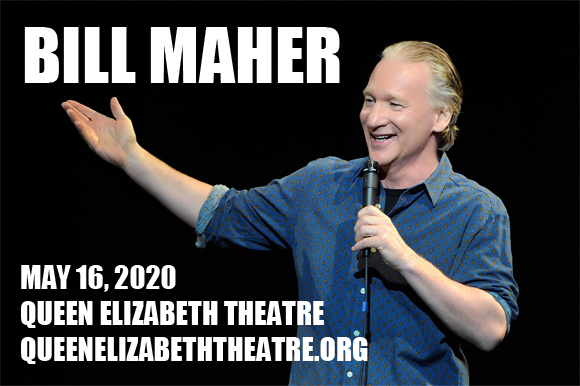 Bill Maher is an American comedian, political commentator and television host who rose to fame in the 1990s, after beginning his career as a comedian and actor in the late-1970s and early-1980s. In 1993, Maher became the host of Comedy Central's late-night political talk show Politically Incorrect with Bill Maher, which ran on the network until 1997, when it moved to ABC, where it stayed until 2002. Politically Incorrect won a number of awards during its time on TV, including an Emmy Award for Outstanding Technical Direction, two CableACE awards for Best Talk Show Series, and a Genesis Award for Best Television Talk Show. Maher also earned numerous award nominations for his producing, writing, and hosting of Politically Incorrect, including ten Emmy nominations, two TV Guide nominations, and two Writers Guild nominations. In 2003, he began hosting the HBO political talk show Real Time with Bill Maher, which was nominated for a Primetime Emmy Award for Outstanding Variety Series every year from 2005 through 2014, and for the Primetime Emmy Award for Outstanding Variety Talk Series in 2016 & 2017. In 2010, he was awarded with a star on the Hollywood Walk of Fame.