Chvrches is finally back, coming out of your screens and onto the live stage at Queen Elizabeth Theatre on Wednesday, 28th of September 2022, as they throw in a set of shows across the country in support of their fourth studio record "Screen Violence". With their track “How Not To Drown” with The Cure's Robert Smith bagging an award for Best Song By A UK Artist at the BandLab NME Awards, Chvrches is set to take their synth-pop goodness back to the stage. Get ready to chase the beat and rave to Chvrches' best hits and bops from Screen Violence with the crowd by grabbing your tickets now! 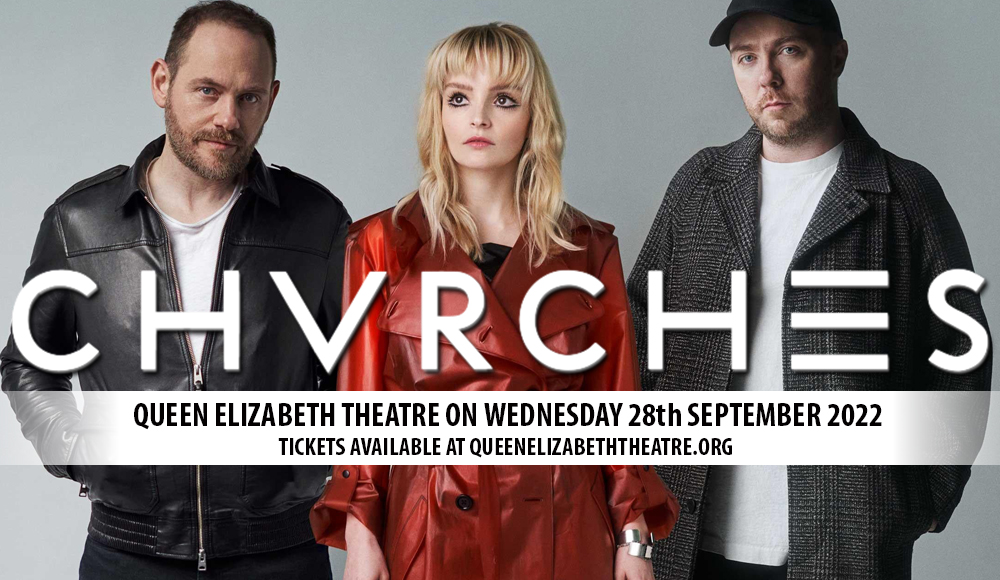 Chvrches found their breakthrough success when the trio Iain Cook, Martin Doherty, and Lauren Mayberry posted their debut song "Lies" on Neon Gold Records blog. They placed a picture of nuns in masks, which added a mysterious religious effect associated with their band's name. "There wasn't really any goal other than to put a song out on the internet and see what kind of response we got" Doherty shared.

Yet people soon found Chvrches like a hidden gem, "Lies" hit #1 on The Hype Machine, receiving constant airplay on BBC Radio 1 and SoundCloud. "It was unbelievable, way beyond what we expected," Doherty said.

In 2013, the trio finally dropped their full-length debut studio album "The Bones of What You Believe" with "The Mother We Share" as their debut single. The record hit #9 and #12 in the UK and US respectively. They were included in the top 5 in BBC's Sound of 2013 list. At this time, they received nominations at the NME Awards for "Best New Band" and "Best British Band". They were also nominated for "British Breakthrough Act" at the Brit Awards.

With rising popularity and acclaim, Chvrches continued their momentum, releasing their second album "Every Open Eye" in 2015. They continued to serve their signature synths, dropping more bops for fans through singles "Leave a Trace", "Clearest Blue", "Never Ending Circles", "Empty Threat", and "Bury It" featuring Hayley Williams. The album charted at #4 and #8 in the UK and US respectively.

In 2018, they dropped their next album "Love Is Dead", and "Screen Violence" in 2020. The records feature fan favorites including "Miracle", "Get Out", "He Said She Said", and "How Not to Drown" with Robert Smith.

So, take yourself to 'chvrch as Chvrches embarks on a tour, performing a set of shows across North America. Catch them stop by and perform at Queen Elizabeth Theatre on September 28, 2022. Book your tickets now!