Renowned jazz-men Herbie Hancock and Kamasi Washington come to Queen Elizabeth Theatre on Saturday 29th June 2019 as part of a co-headlining tour! The 14-time Grammy Award-winning pianist and sensational saxophonist are a match made in heaven that bridges the gap between jazz-loving generations – Hancock has been a stalwart of the jazz scene since performing with Miles Davis in the 1960s and Washington performed on Kendrick Lamar's To Pimp a Butterfly! Together, they make an incredible pairing, guaranteed to blow you away! 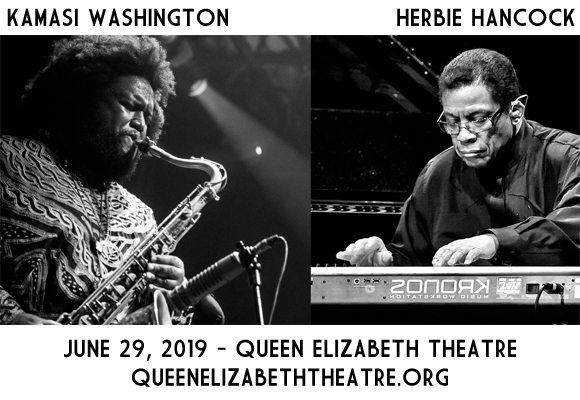 American pianist, keyboardist, bandleader, composer and actor Herbie Hancock is a renowned jazz musician who began his career in the 1960s working alongside Donald Byrd and Coleman Hawkins. His recorded his debut solo album, Takin' Off, in 1962, which contained the hit "Watermelon Man", which has been performed by dozens of musicians in subsequent years, including bandleader Mongo Santamaría. Hancock's big break came when he was picked by Miles Davis to join the Miles Davis Quintet, with whom he performed until 1968. Some of Hancock's best known compositions include "Cantaloupe Island", "Maiden Voyage", "Chameleon", and the singles "I Thought It Was You" and "Rockit". He has released 42 studio albums to date, including the 2007 tribute album River: The Joni Letters, which won the 2008 Grammy Award for Album of the Year.