Jason Mraz will be joined by longtime collaborators and all-female folk-rock four-piece Raining Jane for "Ladies & Gentleman, An Evening with Jason Mraz & Raining Jane," coming to Queen Elizabeth Theatre on Friday 8th November 2019! The multi-platinum-selling singer-songwriter will perform re-imaginings of his singles and rarities with the talented ensemble, bringing you his hits like you've never heard them before! 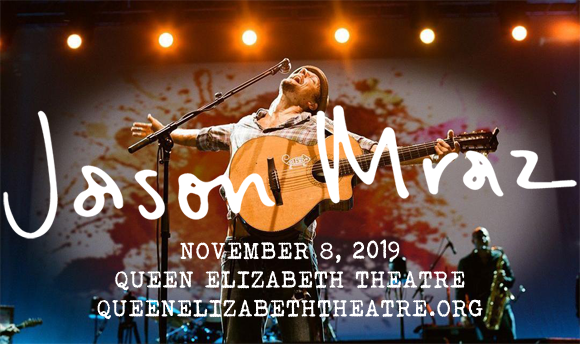 Two-time Grammy Award-winning singer-songwriter Jason Mraz began his career on the local coffee house circuit in San Diego, gaining a local following with his self-released live album Live at Java Joe's (2001). The album caught the interest of Electra Records, and he was signed later that year, releasing his debut studio album, Waiting For My Rocket to Come, in 2002. Waiting For My Rocket to Come launched his first top ten single, "The Remedy (I Won't Worry)", and was certified platinum, bringing him almost overnight success. That success continued with 2005's Mr A-Z, which sold over 100,000 copies in the US and peaked at number 5 on the Billboard 200. Three years later, Mraz became a global phenomenon when his single “I'm Yours”, from the album We Sing. We Dance. We Steal Things., peaked at number 6 on the Billboard Hot 100, spending a record 76 weeks on the chart, and was eventually certified seven-times platinum by the RIAA. The song was an international hit and the album reached number three in the US, UK and Australia. Mraz has sold over 7 million albums to date, and has earned platinum and multi-platinum certifications in over 20 countries. His sixth and most recent studio album, Know, was released in 2018.