He's one of the funniest in the business, and now Jerry Seinfeld comes to Queen Elizabeth Theatre on Thursday 4th October 2018 for not one, but two nights! The comic, writer, producer, director and sitcom star returns to his roots in stand-up comedy, bringing his guffaw-worthy tour to the stage with a plan to get you laughing 'til your sides split! Book your tickets ASAP – this one will sell out for sure! 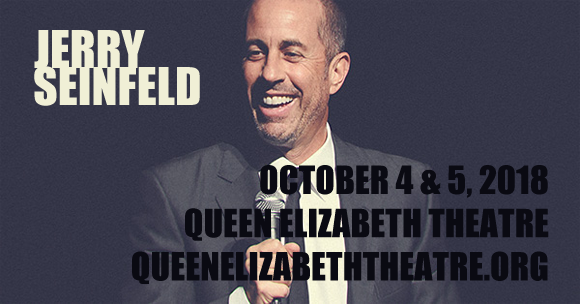 Creator, writer and star of the 1988 – 1988 sitcom Seinfeld, Jerry Seinfeld is an American stand-up comedian, actor, writer, producer, and director. Seinfeld's career beginning were in the 1970s, when he would perform at open mic nights around New York. In 1976, an open mic spot led to an appearance in a Rodney Dangerfield HBO special, and another television opportunity arose in 1980 when he landed a small recurring role on the sitcom Benson. The following year saw Seinfeld charm audiences on The Tonight Show Starring Johnny Carson, which was the first of several talk show appearances for Seinfeld throughout the 1980s. His first ever one-hour stand-up special, filmed for HBO, was in 1987 and it was called Stand-Up Confidential. Seinfeld the sitcom began in 1988, and by its fourth season it had become the most popular and successful sitcom on American television. The end of the show in 1988 meant a return to stand-up for Seinfeld, who was named as the "12th Greatest Stand-up Comedian of All Time" by Comedy Central in 2005. Currently, he hosts the web series Comedians in Cars Getting Coffee, which he also created.