The revolutionary German electro-pop band Kraftwerk is celebrating its 50th anniversary this year! The avant-garde group is known for spearheading electronic music as we know it and its musical legacy is unrivaled, so the chance to watch the group perform from its sensational back catalog is a must for any music-lover! The 50th-anniversary tour comes to Queen Elizabeth Theatre on Saturday 20th June 2020 and will be performed in 3-D in the band's unique, stylized way, creating an otherworldly show that will be remembered for years to come! 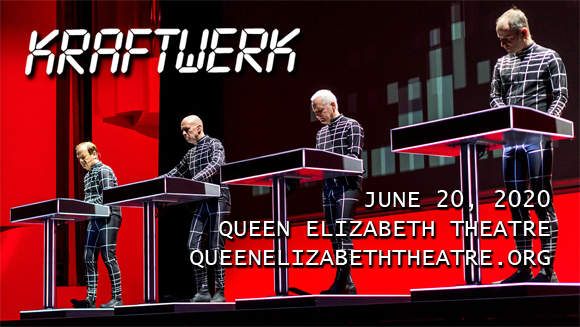 It's widely acknowledged that without Kraftwerk, music would not be the same – the trailblazing German band laid the groundwork for a wide variety of music genres, including synthpop, hip hop, post-punk, techno, ambient, and club music. Formed in 1970 in Düsseldorf by Ralf Hütter and Florian Schneider, the band started as a krautrock group, but with the increased use of synthesizers, drum machines, and vocoders they created a new style of electronic "robot pop." The band's 1974 album Autobahn was an unforeseen global hit thanks to its title track, which charted at number 11 in the UK, number 12 in the Netherlands, number 25 on the US Billboard Hot 100 chart, and number 30 in Australia. Trans-Europe Express (1977), its follow-up, was critically acclaimed and over the years has come to be recognized as a highly influential work. Their seventh studio album, The Man Machine (1978), enjoyed similar success and reached number nine of the UK Albums Chart when it was re-released in 1982. Kraftwerk has been honored by the Grammy Awards three times: with the Grammy Hall of Fame Award (2014), the Grammy Hall of Fame Award for Autobahn (2015), and the award for Best Dance/Electronic Album for 3-D The Catalogue (2018).