MASSIVE announcement! Nightwish is on their seventh global tour in 2017, entitled “Decades: Wold Tour,” featuring a special one-of-a-kind setlist including rare songs from their earliest days with some fresh new twists! The Finnish metal giants will land at the Queen Elizabeth Theatre on Saturday 7th April 2018! If you're a fan of Nightwish, then whatever you do, don't miss it – tickets are bound to sell fast so get yours while you can! 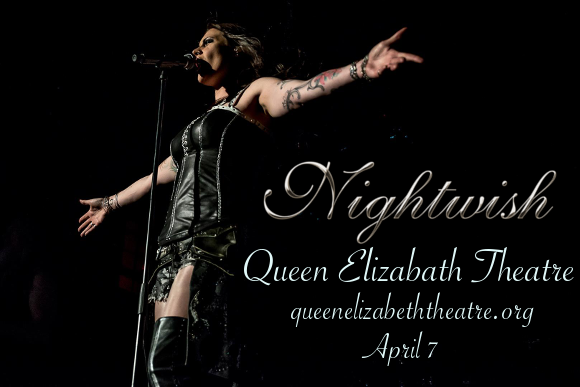 Since their first release in 1997, “Angels Fall First,” Nightwish became highly respected in the symphonic metal genre first in their home country, and then, with the release of the albums “Oceanborn”, “Wishmaster, ”and “Century Child,” conquered the rest of the world!

After several line-up changes with the departure of the original lead vocalist, Tarja Turunen, now fronting Nightwish is the formidable Floor Jansen of After Forever and ReVamp! Joining Nightwish initially to fill in for their previous vocalist to complete the “Imaginaerum World Tour”, Jansen performed so well that both fans and the band were desperate for her to stay!

The 2018 tour will be Nightwish’s first with Floor Jansen as a permanent member – we can’t wait to see what they’ve got in store for us all!!