One of the most innovative and influential rock bands ever to walk the planet are coming to the Queen Elizabeth Theatre on Monday 4th December 2017! That's right, it's the Pixies, on tour with their incredible 2016 album, "Head Carrier". for a night of unforgettable entertainment! Get your tickets today to ensure you don't miss out. 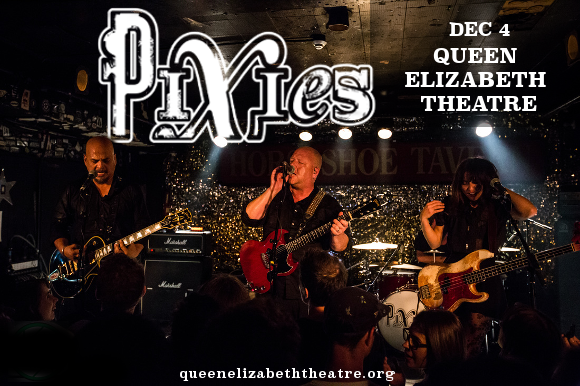 Hailing from Boston, Massachusetts, the pixies are one of the single most important bands of the 80s, the legacy having created the likes of Radiohead, Blue, Weezer, The Strokes, and, most famously, Nirvana – frontman Kurt Cobain having famously said, when describing how he came up with the song “Smells Like Teen Spirit”: “I was basically trying to rip off the Pixies. I have to admit it. When I heard the Pixies for the first time, I connected with that band so heavily I should have been in that band — or at least in a Pixies cover band.”

After releasing a string of successful albums, the band broke up due to disagreements in 1993. Around this time the popularity increased worldwide, creating huge demand for the band’s reunion. After 11 years, it seems like it would never happen, but in 2003, rumour started circulating that the pixies might get back together, and sure enough in 2004 they announced a full tour, tickets for which sold out within minutes of their release! The band has seen lineup changes with bassist Kim Deal leaving in 2013, but the band are still going strong today with Paz Lenchantin on bass.

What are you waiting for?? Grab your Pixies tickets NOW while they last!!