British funnyman Ricky Gervais brings his hilarious Humanity Tour to Queen Elizabeth Theatre on Monday 29th January 2018 for a two-night-stand of comedy gold! The Office star noted in his blog that he has high hopes for the worldwide tour:

"Humanity is turning out to be my best stand up yet. I think it's because truth is so important now." 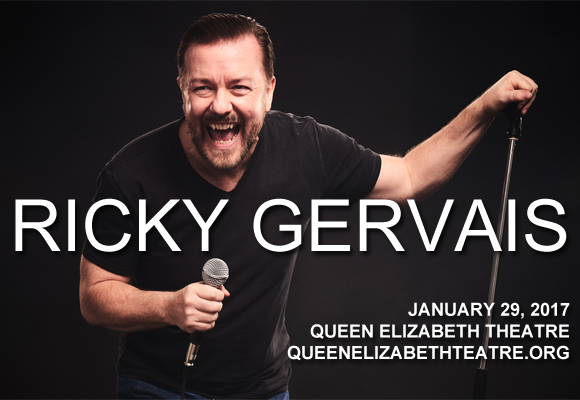 English comedian, actor, writer, producer, director, singer, and musician Ricky Gervais first found mainstream attention in the late 1990s writing for and starring in Channel 4 comedy programmes, as well as writing sketches for the BBC. Gervais' big break came in 2001 with BBC mockumentary sitcom The Office, followed by Extras in 2005, both of which he wrote, directed and starred in. Since then, he has also starred in the Hollywood films Ghost Town, and Muppets Most Wanted, and wrote, directed and starred in The Invention of Lying and the Netflix released Special Correspondents, as well as embarking on four stand-up tours and starred in the podcast The Ricky Gervais Show. To date, Gervais has won seven BAFTA Awards, five British Comedy Awards, three Golden Globe Awards, two Emmy Awards, and the 2006 Rose d'Or, as well as a Screen Actors Guild Award nomination.