Everyone loves and can sympathize with a rags-to-riches – Cinderella story. But what if the opposite just happened? A wealthy family loses everything and moves to a small town with a bizarre name — Schitt$ Creek. This Emmy-nominated cult classic which is now running on its fifth season will now grace the live stage for an interactive night with a panel of its cast members and creators. Join the gang of Schitt's Creek at the Queen Elizabeth Theatre on Sunday 20th October 2019. Unveil new stories and plots behind the scenes that are as interesting and as engaging as what you see onscreen. Go, book your tickets now! 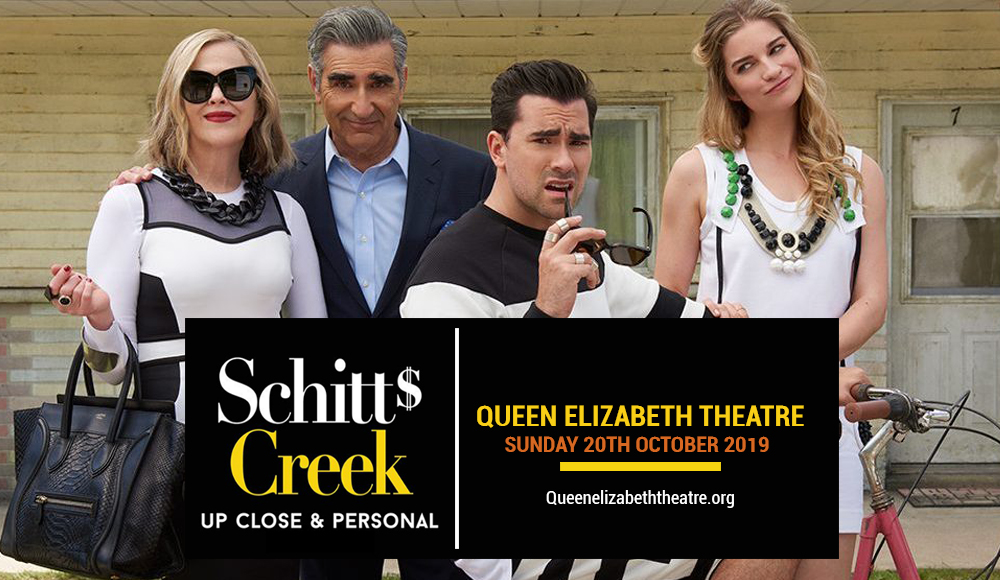 The anti-thesis of a Cinderella story could be experienced in a small neighborhood called Schitt$ Creek. Creators Daniel Levy and his father Eugene Levy put together this TV sitcom production that spawned from Daniel pondering about this plausible situation: "I had been watching some reality TV at the time and was concentrating on what would happen if one of these wealthy families would lose everything. Would the Kardashians still be the Kardashians without their money?"

From there. Daniel and Eugene spun the threads of this plot to turn it into a full-blown TV sitcom. The show premiered on CBC Television on January 13, 2015. Wikepedia has made a run down of the show's awards and accolades. Baggin the ACTRA Award and 18 Canadian Screen Awards, It is the first Canadian comedy series to be nominated for a Critics' Choice Television Award for Best Comedy Series and first to win a MTV Movie & TV Award, winning Best Comedic Performance for Daniel Levy in 2019. It is also the first program from Pop TV to receive Primetime Emmy Award nominations, including Outstanding Comedy Series. Variety caps it by hailing the show as one of “the best TV shows of the year.”

As this show goes on the road, fans will be treated to some never-before-seen clips, behind-the-scenes footage, anecdotes from cast members, and and creators of the series. It will be live, interactive evening that promises to be fun, engaging and insightful.

Go behind the screen and pop out into a live stage. Get a ticket and save your seat. It's going to be a helluva ride!