So You Think You Can Dance? Tickets

Join Top-Ten dancers Robert Green, Logan Hernandez, Lex Ishimoto, Koine Iwasaki, Dassy Lee, Kaylee Millis, Kiki Nyemchek, Taylor Sieve, Sydney Tormey and Mark Villaver, and All-Stars Jasmine Harper and Marko Germar, for the entertainment tour of the year as So You Think You Can Dance? comes to Queen Elizabeth Theatre on Tuesday 28th November 2017! This energetic and entertaining show gives you the opportunity to see your favorite dancers live, as they high-kick their way through a night you'll never forget! 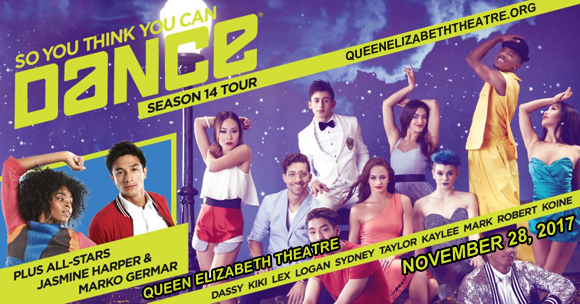 Premiering on July 20, 2005 with over ten million viewers, So You Think You Can Dance? is an American  televised dance competition show, which airs on Fox. By the end of the 2005 summer season, the show was the top-rated show on television, and to date it has won seven Primetime Emmy Awards for Outstanding Choreography and a total of nine Emmy Awards altogether, having just finished its 14th season.