The rumors have been confirmed!! Post-grunge group Switchfoot are returning in 2019 with an all-new album “Native Tongue,” and support from special guests Colony House and Tyson Motsenbocker!! It’s all happening at the Queen Elizabeth Theatre on Saturday 13th April 2019 – be there!! Get your tickets to see Switchfoot today!! 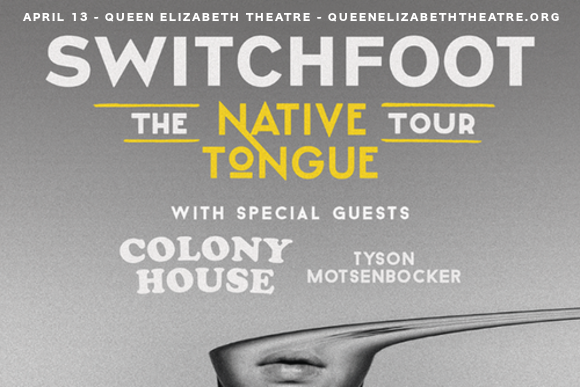 With the same lineup of Jon Foreman, Tim Foreman, Chad Butler, Jerome Fontamillas, and Drew Shirley since the band’s formation in 1996, Switchfoot first appeared on the Christian rock scene, later going on to gain recognition worldwide. To date, they remain one of San Diego’s best-loved bands. “Native Tongue,” will be their 11th full-length studio release.

“We're so excited to present this album to you!” the band wrote in their announcement of the upcoming record, and continued to describe the theme of the album, one of togetherness and strength in the face of adversity. “In a world driven by fear we wanted this album to be a love letter. An invitation… Yes, we are different, you and I. But even our differences speak to our native tongue, that which we hold in common.”

Fans get ready to unite at the Queen Elizabeth Theatre on Saturday 13th April – have you got your tickets yet??