Are you ready for one of the most iconic and unique acts in indie folk and synthpop? The identical twins with identical talent that are Tegan and Sara are coming to the Queen Elizabeth Theatre on Saturday 28th October 2017 for a night of unforgettable entertainment! The duo are now on tour with their critically acclaimed new record, “Love You To Death”. 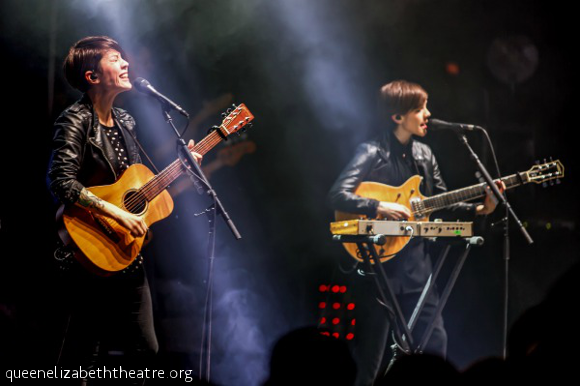 Having been writing songs together since the age of 15, Tegan Rain Quin and Sara Keirsten Quin decided to form a band in 1995. Their debut album, “Under Feet Like Ours,” in 1999 started to win them an underground fanbase, and in the same year they signed with Neil Young’s label, Vapour Records, releasing their second album, “This Business of Art” on the label.

Steadily gathering momentum as they toured, their fourth album, “So Jealous,” led to broader attention – particularly when the track “Walking With A Ghost,” was covered and released by The White Stripes, gaining the duo enormous new reach!! With a series of successful albums following, the pair released their 8th and most recent, “Love You To Death,” in 2016 to universal critical acclaim.

Don’t miss out on your chance to see the Canadian songstresses live – book your tickets to see Tegan and Sara today!!