Experimental rock and post-punk fans, you’re in for a treat. The Flaming Lips are on tour promoting their BRAND NEW album, “Oczy Mlody,” on a series of shows across North America that will see them land on the stage of the Queen Elizabeth Theatre on Monday 15th May 2017! Guaranteed to be a sell out show – book your tickets early to avoid disappointment!! 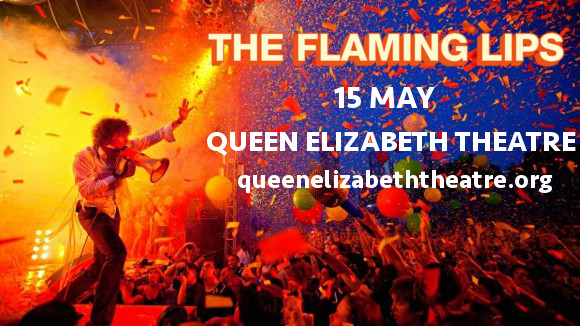 Rising to the forefront of 70s and 80s psychedelic subculture, The Flaming Lips, formed in 1983, are considered pioneers of the psychedelic rock genre. Their music features multi-layered, complex and atmospheric instrumentation, whilst their lyrical content draws heavily from the sicence fiction and space opera genres, using their content in terms of imagery and plot to convey themes about cyclic romantic love, exploring it at both a vulnerable and tangible level to an entirely abstract one.

It isn’t just their music that’s influenced by psychedelia; the band are well-known for their phenomenally unique live shows that immerse all the senses of their audience. Incorporating stage effects from costumes, balloons, and puppets to complex stage light configurations, mechanical giant hands and confetti cannons, the highlight for many is frontman Wayne Coyne’s giant plastic bubble, which he uses to perform on the audience! With the many hands passing the singer around inside his sphere, The Flaming Lips take crowdsurfing to a whole new level!!

The band are on tour in promotion of their album “Oczy Mlody,” the lead single of which has been described by renowned music blogger Brooklyn Vegan as a; “somnambulistic, surreal trip, not unlike something that could’ve been on The Soft Bulletin or Yoshimi Battles the Pink Robots… the video is a typically Lips-ian dream, full of roman candles, furry suits and jumpropes of fire. ”

Don’t miss out on your chance to catch all this live – book your tickets to The Flaming Lips TODAY!!!