Jack White-led, Grammy Award-winning rock band The Raconteurs are back with their first album in over a decade, and they're headed to Queen Elizabeth Theatre on Friday 19th July 2019 to showcase their brand new material! This is the Detroit quartet's first stint on the road in 8 years, and they'll be playing recent singles “Sunday Driver” and “Now That You’re Gone,” as well as other tracks from Help Us Stranger, and classics like the worldwide hit "Steady, As She Goes!" Tickets available now! 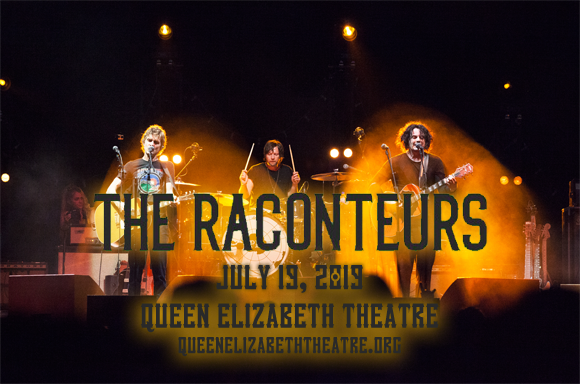 Formed in Detroit, Michigan in 2005, The Raconteurs is an American rock group formed of  Jack White (vocals, guitar), Brendan Benson (vocals, guitar), Jack Lawrence (bass guitar), and Patrick Keeler (drums). Although the band is often referred to as a supergroup, due to its members' involvement in a variety of other successful bands (The White Stripes, the Greehornes, the Dead Weather), they refute the term due to the organic formation of the group, and think of themselves as "a new band made up of old friends." Their full-length debut album, Broken Boy Soldiers, was released in 2006, preceded by the single "Steady, As She Goes," which was an international hit. Consolers of the Lonely, their second album, was released in 2008 and in 2009 it was nominated for the Grammy Award for Best Rock Album, and won the Grammy Award for Best Engineered Album, Non-Classical. After embarking upon a hiatus in 2010 so that each member could focus on their other musical projects, the band reunited in 2018 and their third studio album, Help Us Stranger, is released in June 2019.