Queen Elizabeth Theatre brings you the very best in live music!! None other than indie dream pop-rockers The Shins are taking to the stage on Saturday 27th May 2017! We expect tickets to sell out quickly for this event, so don't delay in getting yours – book early to avoid disappointment!! 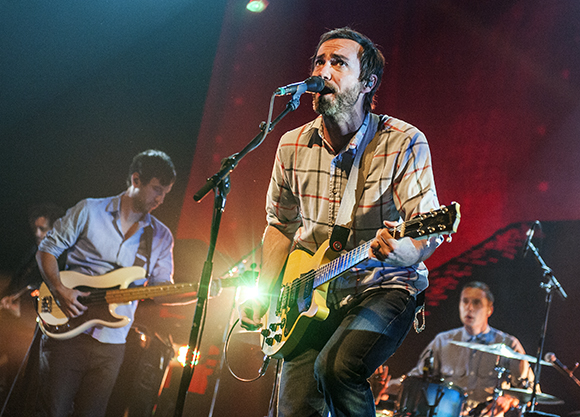 Formed in 1996 Albuquerque, New Mexico, the band was formed by, and remains the active project of, James Mercer, principal songwriter, vocalist, and guitarist, with a lineup that has continuously shifted, currently consisting of dummer Jon Sortland, guitarists Casey Foubert and Mark Watrous, bassist Yuuki Matthews and keys player Patti King. Touring with Modest Mouse after releasing their first album, “When You Land Here It's Time To Return,” when they were signed to Sub Pop Records. Their first two albums on the label, “Oh, Inverted World,” and “Chutes Too Narrow,” were released to widespread popularity from the public and a hugely enthusiastic reaction from critics. Their single “New Slang,” was featured in the soundtrack for the 2004 film “Garden State”, gaining them massive interest and paving the way for huge success for their fourth album, “Wincing The Night Away,” in 2007, which hit second place on the Billboard 200 and earned the band a Grammy Award.

Today, the band are on tour promoting their brand new album “Heartworms,” the first produced almost entirely by Mercer and featuring some new and quirky new material for the band; the first single, “Name For You,” is a song with a distinct feminist theme, inspired by Mercer's own daughters. Listen to the single below and be quick on getting those tickets!!