Multi-platinum-selling, Juno Award-winning operatic pop trio The Tenors are headed to Queen Elizabeth Theatre on Tuesday 3rd December 2019 for a very special festive concert! The classical crossover group are performing as part of their Wonder of Christmas annual holiday tour, bringing you a selection of all your favorite Christmas hits in rich, three-part harmony, spreading joy and cheer at this most wonderful time of the year!

"Sharing the joy of the holidays through music with our families and extended families – our fans – is one of our favorite ways to celebrate the Christmas season," said The Tenors. 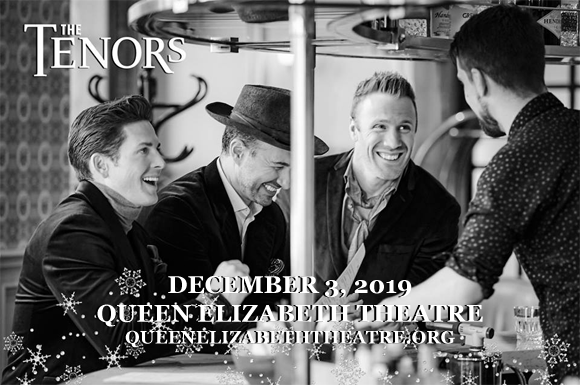 An operatic pop vocal group hailing from British Columbia, Canada, The Tenors (originally known as The Canadian Tenors) consists of Victor Micallef, Fraser Walters and Clifton Murray. Formed in 2004, the group made its debut in 2005 with their platinum-selling eponymous first album. To date, The Tenors have released five studio albums to date, including 2012's Lead With Your Heart, which went triple-platinum in Canada, and won the 2013 JUNO Award for Adult Contemporary Album of the Year. Throughout their career, the group has performed on over 60 television shows to date, including the Oprah Winfrey Show, and they also had the honor of performing at the 63rd Primetime Emmy Awards, as well as the opening ceremonies of 2010 Winter Olympics in Vancouver and on ITV (TV network) Diamond Jubilee Show at Windsor Castle for HM Queen Elizabeth II. 2017 marked the release of their most recent studio album, the holiday-themed Christmas Together.