The Flying Dutchman, The Opera first premiered in Dresden in 1843, now comes to Queen Elizabeth Theatre on Thursday, May 4th, 2023. The famous German composer, Richard Wagner, composed the music to The Flying Dutchman Opera. The storyline is based, to a large extent, on Wagner’s own attempt to flee from his creditors in Riga, across the sea, to start a new life of fame and fortune in Paris, in 1839. The opera was originally intended to be a single piece of music, but as is typical of his break with traditions of the time, he merely cut the piece into three sections to fit his three-part story line. 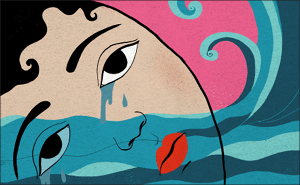 In an attempt to escape his debts and his creditors, he bravely sailed the turbulent seas to Paris from Riga. The famous German composer, Richard Wagner, at the time, was only 26, employed as a conductor. He had run up significant debts following his extravagant lifestyle. The sea voyage should have taken eight days, but actually lasted three weeks. Arriving in Paris, almost penniless and destitute, the Wagner’s battled on for a few years until Richard came up with the idea of writing an opera, based on the theme of the Flying Dutchman, with some of his own experiences highlighted in the story line.

The Flying Dutchman opera tells of a narrator watching a fictitious scene of the sea captain, cursed forever, to sail the seas as punishment for his blasphemy. He can only be redeemed by the love of a beautiful maiden.

The opera was originally intended to be performed as a single piece of music, but as he often did, to break with traditions of the time, Wagner, having written the story line to the opera in three parts, merely broke the musical book into three sections.

The Flying Dutchman premiered in Dresden in Germany in 1843.