If weird is the new normal these days, then Weird Al Yankovic is and has always been ahead of his time. Yet remains very much relevant to a multi-generation of music aficionados. Hence, Weird Al Yankovic's "Strings Attached" tour is a welcome treat for audiences of all ages. He's serving a buffet of musical parodies that would tickle both music taste buds and funny bones of a cross-section of music eras and genres; and yes it comes with an elegant serving of a full symphony orchestra, to boot. If you're thinking of a great, fun, friendly, family kind of entertainment, the Queen Elizabeth Theatre is the place to be. Save the date: Monday 19th August 2019, and start booking your tickets now! 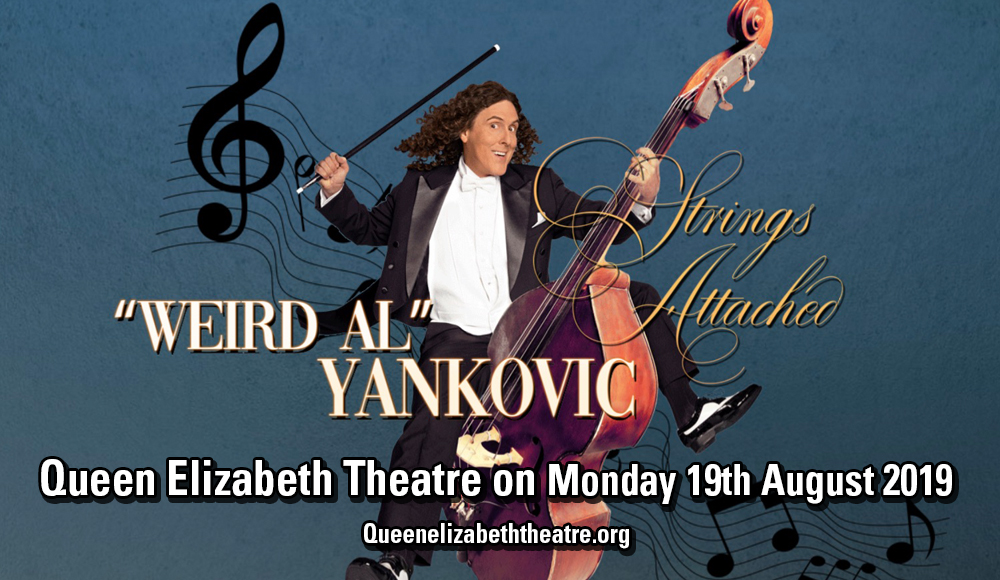 American pop culture wouldn't be as vibrant and colorful as it is now without the ingenious contribution of Weird Al Yankovic. His irreverent art of creating music parodies out of the latest pop tunes started out in the 70s, and still, he is one of the unstoppable music forces to reckon with to this day.

Alfred Yankovic, or simply Weird Al, started out playing with the accordion at the age of six. Then he started to have a keen interest in both music and comedy. In his college senior year, Al wrote a parody for The Knacks' monster hit "My Sharona", which he twisted into a ditty called "My Bologna." The band members of The Knack themselves were super impressed and recommended Al to their record label to release the single and push for radio airplay. From there, there was no turning back for Al. He moved forward as Weird Al, and that single became the catalyst of a long enduring and successful career, hitting both the mainstream pop and comedy audiences. When a song explodes into a monster hit, Weird Al will surely blow it up to smithereens. Weird Al continued his winning streak with an unbroken string of hits. He took on Queen's "Another One Bites the Dust" and turned it into "Another Rides the Bus". He spliced up Madonna's breakout hit "Like A Virgin" with "Like A Surgeon". He gobbled up Michael Jackson's "Beat It" and "Bad", and spit it out as "Eat It" and "Fat", then ended up scooping up and taking home back-to-back Grammy Awards.

To date, Weird Al Yankovic has 14 studio albums and 46 singles to his name. He is currently having a blast and is set to tour the country again, this time with a full symphony orchestra. It is not just him on the mic and a whole orchestra at the back. Weird Al will literally be all over the stage, painstakingly doing reenactments, costume changes, and full blown production galore. “We’re going directly from my most scaled-down, low-key show ever to my most full-blown, over-the-top extravaganza ever,” Yankovic wrote in an Instagram post announcing the tour. “We bringing back the costumes and the props and the big video screen.” Weird, eccentric, and wild as it may seem, but it will definitely be a riot!