Why Don't We [CANCELLED] Tickets

With only eight letters, they've managed to make the world fall in love with their heart-fluttering lyrical goodness that anyone could relate to. With a new album up their sleeves, Why Don't We is back on the road, hitting the stage at Queen Elizabeth Theatre on Friday, September 23rd, 2022, on The Good Times Only Tour. This new big tour is in support of their sophomore album "The Good Times and the Bad Ones" – featuring their hit single "Fallin' (Adrenaline)". They also just recently released their newest track "How Do You Love Somebody" where they deliver their signature electric energy and lyrical relatability. Get ready to fall in love even harder as this is Why Don't We's best era yet. Fans are in for a good time at The Good Times Only Tour! So book those tickets now! 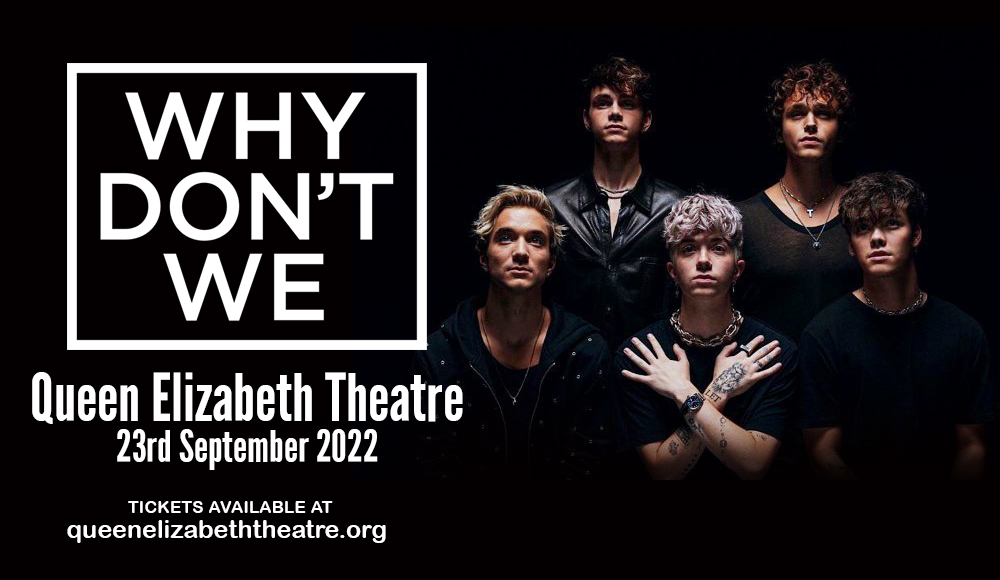 With some hiccups that postponed ticket sales for their summer tour, Why Don't We's The Good Times Only Tour is back! Set for a good time to meet their fans, perform their hits, and share live renditions of their new tracks on stage, the band shared on Instagram "don’t EVER let anyone stop you from livin your dreams… we are still hitting the road… DONT MISS IT".

You definitely shouldn't miss Why Don't We's biggest and best era yet as this new record serves as a testament to their own shared talent and efforts. The Good Times and the Bad Ones is largely self-written and self-produced by the boys themselves, alongside guest production by Skrillex, Travis Baker, and Timbaland.

Members Jack Avery, Corbyn Besson, Zach Herron, Jonah Marais, and Daniel Seavey are ever-so-proud of this new album that they can wholeheartedly call "theirs".

The band emerged into global success with the release of their debut full-length album "8 Letters" in 2018. It featured hit singles "Trust Fund Baby", "Hooked", and "8 Letters".

Though experiencing an early breakthrough, Why Don't We expressed that their past work was largely composed of collaborations or influences by their label. "The process before was, we’d listen to songs and make some changes and fall in love with them and put them out. said Besson. With much time taken to craft their sophomore record, "this album is 100% purely us, so it feels really big for us in that sense." he added.

Inspired by their success in the industry, Why Don't We took on the challenge to test their potential as great musicians. The album is a product of their hard work and determination to show the world a sound that is authentic to their core as a group.

“I think we’re more happy with the fact that we can be honest and really be passionate about what we’re doing now more than ever.” said Seavey.

Along with the big announcement that The Good Times Only tour is back, the boys dropped a new song and music video named "How Do You Love Somebody". The boys serve their signature energy driven by more electric guitars in the very relatable lyrical and melodic goodness of a song.

“This song is filled with electric energy and even more electric guitars. It’s an anthem for all who have had a past lover that moved on too quickly, which all 5 of us can, unfortunately, relate to. We had so much fun making ‘How Do You Love Somebody’ and we hope you enjoy it as much we do!” the band shared.

With the tour back on track, and big surprises along the way, only good times are ahead of Why Don't We. So, come join the fun and catch the boys giving it their all on stage at The Good Times Only tour. So, hit that button and book your tickets now!