There are 5000 people in Letterkenny and these are their problems. Letterkenny Live in Vancouver at Queen Elizabeth Theatre on Wednesday, March 9th, 2022. Grab your tickets now to the hilarious comedy show following the lives of the small people in the small town of Letterkenny. Focusing on siblings Wayne and Katy, who run a small holding farm and produce stand with help from their friends Daryl and Squirrely Dan.
Episodes deal with small-town life amongst different types of people: the farmers, known as the hicks, the out-of-towners who make up the local ice hockey team, the town's closeted minister, the drug addicts, known locally as the skids, members of the nearby First Nation reserve, and the local Mennonites Québécois 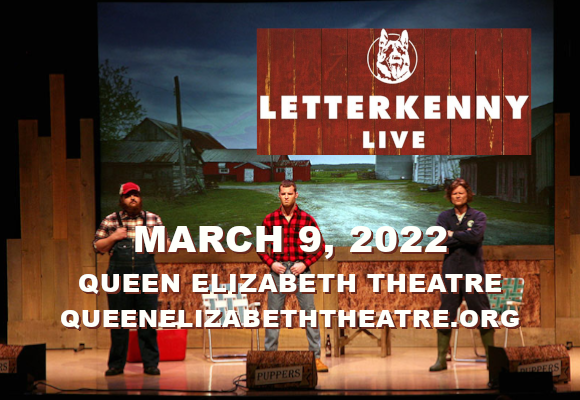 "Refreshing, intoxicating, funny, mad, droll, childish, and spiky. Not since Trailer Park Boys launched, have we heard the flavorful, salty Canadian vernacular used with such aplomb and abandon, almost all the conversations are raw comedy and utterly plausible as small-town guy talk, not just in Canada but in villages and parishes wherever the grass grows." – The Globe and Mail

The show follows the residents of Letterkenny, a fictional rural community in Ontario, and is loosely based on Jared Keeso's hometown of Listowel, Ontario. Letterkenny started life in 2013 as a short format YouTube series created by Jared Keeso, it originally consisted almost entirely of Keeso and Dales trading off comedic one-liners while simply standing in various locations. The series was then picked up by CraveTV in 2015 and the first full episode aired in early 2016.
The web series was nominated for a Canadian Screen Awards in 2014 for Best Original Fiction Program, and then the full TV production series won 3 Canadian Screen Awards in 2016, 2 in 2017 and another 2 in 2018.

Tonight, the show will be performed by Jared Keeso as Wayne, Nathan Dales as Daryl, Michelle Mylett as Katy, K. Trevor Wilson as Dan, Dylan Playfair as Reilly, Andrew Herr as Jonesy, Tyler Johnston as Stewart, Evan Stern as Roald, and Mark Forward as Coach.